Jet Fans Are All In Groundhog Day Movie!

Groundhog Day is a 1993 American fantasy comedy film directed by Harold Ramis and written by Ramis and Danny Rubin. It stars Bill Murray as Phil Connors, a TV weatherman who, during an assignment covering the annual Groundhog Day event, is caught in a time loop, repeatedly reliving the same day.

The above is the Wikipedia description of the classic Bill Murray movie. Instead of Murray reliving the same day, we Jet fans are reliving another season and we seem to be caught in our own time loop with the season, game, and 4th quarter always the same. Change the coach, change the GM, even change the uniforms, get the supposed franchise quarterback but the Jets are still the Jets. And no one can blame Todd Bowles on this one. It was a horrid loss being up 16-0 only to lose 17-16. Our quarterback whisperer coach Adam Gase showed us that Sam Darnold took a step backwards. Besides one good drive where he showed his athleticism on a TD called back and the two-point conversion after his TD redo, Sam Darnold (28-41 175 yds. 4.3 yds. per pass, 1 TD) did everything in his power to make the Buffalo Bill defense all look like Boston Celtic legend Bill Russell knocking away his passes at the line of scrimmage. Please Jet fans don’t use the CJ Mosley injury as an excuse for the loss. The Jets lost it in all aspects of the game. Sam Darnold never looked comfortable and except for one drive never got into a rhythm. In fact I thought Sam was doing his best impersonation of Mark Sanchez. I don’t know if his unsettled situation caused it but Sam could not throw long. He had Robby Anderson open multiple times and could not make the pass. And don’t forget our kicker. It was obviously wrong letting Jason Meyers walk! Forget field goals! I want a kicker who can make extra points. Well, coach Gase, welcome to our world!

The only "must have' book for t-ball coaches and parents.

Jet Free Agents Shine
CJ Mosley was the defensive star for the Jets. Being in the right place at the right time he caught a tipped pass and returned it for a TD. Later in the game he recovered a fumble on a bad snap that at the time was a crucial 4th and 1. Mosley had a great game but unfortunately he went out with a groin/ankle injury. His replacement Blake Cashman who played well in the pre-season looked over matched.

Le'Veon Bell was also a stud today. I confess I didn’t want the Jets to sign him but this guy gives 100% on every play. He ran hard, caught passes and made a great shoestring TD catch followed by another athletic two point conversion pass reception. He constantly made the big play for the Jets all day.

Jamison Crowder showed his value. With Sam Darnold consistently under pressure, Crowder was his short safety valve and today caught 14 passes for 99 yards. If the Jets can get the offensive line in sync, Crowder will become even more valuable and will have some great receptions with a lot of yards after the catch.

Jet Weak Links Can’t Hide
Get used to it! Every team knows the Jets have inferior defensive backs and QBs will attack them as soon as the game starts. Josh Allen (24-37 254 yds. 1 TD, 2 INT) was picking on both Darryl Roberts and Trumaine Johnson all day. In all fairness Johnson did put in a good streak from the second quarter through most of the third quarter looking real good making tackles at the line of scrimmage. The truth of the matter is both cornerbacks are less than average players and the Jets do not provide a superior pass rush to offset the play of the secondary.

Rookies, May(e) Day and Oh Henry!
Quinnen Williams played but did not record a tackle or an assist. Blake Cashman played in a emergency situation and did not look good. Marcus Maye had one interception called back and dropped another that might have sealed the game. He has got to make that catch. What in the world is Henry Anderson doing on that 3rd down roughing the passer play? He did the same thing against the Pats last year. It was a huge play that helped keep a drive going. Oh Henry! You have to do better!

Second Guessing Gase
Last year Sam Darnold had success when a designed moving pocket was implemented. I did not see one moving pocket play today with that pass rush the Bills had. Gase has got to know by reviewing films and seeing what worked for Sam and what didn’t. This was a major faux pas today. And to offset the Bills' over aggressiveness, why not run a screen pass, a reverse or a little scissors play. There were plays where it seemed the Bills defense knew which play was coming and where. Adam Gase knows today was the first time the offensive line played together in a game and I don’t think he did enough to put Sam Darnold in a position to succeed. Bad coaching!

Green Tidbits
…..Quincy Enunwa, 1 reception, -4 yards. Can’t make it up….. Jordan Jenkins had some good quicks getting pressure on Josh Allen…..Back in 2013 Detroit turned the ball over 4 times and beat the Cowboys with zero turnovers. Last time that happened till today…..Browns lose 43-13. Coming into Met Life next Monday night, a must win for both teams…..If I’m kicker Kaare Vedvik I don’t unpack my bags…..Bills' Ed Oliver had a good game. He is the guy I wanted the Jets to draft instead of Quinnen Williams…..Memo to DC Gregg Williams, don’t wait, bring up DB Kyron Brown this week from the practice squad….If Jets had 11 Jamal Adams on defense and 11 Le'Veon Bells on offense, we’d have a team!…..Offensive line will get better under coach Frank Pollack but it may be too little too late…..Tackle Chuma Edoga will start by the 5th game…..Under the radar was the play of tight end Ryan Griffin (#84) who had a bunch of nice pulling blocks on some of Bell’s runs. He also caught 3 passes….LB Harvey Langi (#44) great play tipping pass Neville Hewitt picked off….Sam Darnold actually averaged 4.3 yards per pass completion. I did not think that was possible.....The accounting firm of Chuma Edoga, Quincy Enunwa, Folorunso Fatukasi and Mike Tannenbaum will be known as: Edoga, Enunwa, Fatukasi and Tannenbaum…..

What The Jet Scribes Are Saying
Rich Cimini, ESPN
The New York Jets have a new coach, a new general manager and pretty much a new everything, but their collapse Sunday was straight out of 2018, when they blew four fourth-quarter leads. Despite a plus-four turnover margin, they lost a game that was almost impossible to lose, falling to the Buffalo Bills, 17-16, after leading 16-0 in the third quarter. They fell apart in all phases. Couldn't get a stop on defense. Couldn't make a kick. Couldn't throw downfield. It was a brutal way to open the season. Choke job. They lacked a killer instinct, especially on offense. There was no aggressiveness and no imagination…..The Jets have a kicking crisis. Kaare Vedvik, their third kicker since the start of training camp, missed an extra point and a 45-yard field goal, basically costing the Jets the game. Blame the front offices (past and present) for this debacle. It has been a kicking carousel since the start of training camp, and they settled for the slumping Vedvik on waivers last week. Former GM Mike Maccagnan should've re-signed Pro Bowl kicker Jason Myers in March, but the Jets low-balled him and he signed with the Seattle Seahawks. Think they'd be willing to take a mulligan on that decision? You bet…..It was a disappointing debut for Sam Darnold, who was under pressure a lot and couldn't establish a downfield passing attack. He missed a wide-open Robby Anderson in the fourth quarter for what would've been a go-ahead touchdown. He struggled to get the ball to Anderson and Quincy Enunwa. It was all Bell and Jamison Crowder.

Brian Costello, NY Post
The offense had no flow after a summer of talking about how creative and explosive it could be and Gase had no solutions. The defense played well for three quarters, but Gregg Williams’ group fell apart in crunch time. The Jets now have seven days to fix things before the Browns come to town…..The defense handed the offense the ball three times in the first half off turnovers and the Jets failed to score each time. They had 11 possessions in the game and only one ended with a score. Adam Gase’s debut was a dud. QB Sam Darnold (28 of 41, 175 yards, 1 TD) was under constant pressure, getting sacked four times. The offensive line had no answers for Buffalo’s blitzes. WR Jamison Crowder (14 catches, 99 yards) and RB Le’Veon Bell (17 rushes, 60 yards, 6 catches, 32 yards, 1 TD) were the only bright spots. 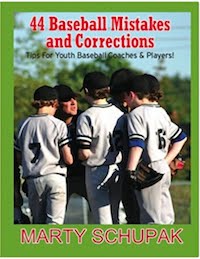 Little League coaches should make this book part of their library
Posted by Marty Schupak at 4:36 PM