The time leading up training camp can be a nightmare for NFL coaching staffs. Having players out of town with the possibility of getting in trouble is on every team’s mind. Let’s face it. We all know the potential situations with millionaires under 30 looking for fun and excitement. General Managers and coaches are on edge hoping players will do the right thing such as calling the NFL limo service to drive them home if they were drinking. And god forbid the unthinkable should happen such as this week with the cross town Giants and Janoris Jenkins. His older brother has been charged with felony aggressive manslaughter in the death of a man found at the New York Giants cornerback's residence in New Jersey on Tuesday. An issue like this will linger and management has to measure what degree it will affect the player and the team. The Jets have their share of headaches and are hoping they don’t escalate. Already on the docket is the hearing for Dylan Donahue on August 9th in Montana for a DUI charge while the Jets play their first pre-season game on August 10.
According to a site called NFL Arrest, 4.71% of NFL players ( of around 1,700 active players) have been arrested. This arrest rate is actually lower than the USA arrest rate. The crimes range from drugs (the most common) to domestic violence to assault. For whatever reason linebackers are arrested more than any other position. For the last five years the Jets have the second most arrested players behind the 49ers. I’d like to see the numbers if the Robby Anderson arrests are taken out of the equation. I always go by the credo that pro athletes should adhere to: “Nothing good ever happens after 2:30 AM.” Let’s hope that league and Jet players will be more mature off the field in the future than they have in the past.

No Contract For Sam!
Jet fans should not be too concerned that Sam Darnold has yet to sign his rookie contract. Of the five first round quarterbacks drafted, only Lamar Jackson drafted #32 by the Ravens and Josh Rosen drafted #10 by the Cardinals have signed their contracts. Baker Mayfield and Josh Allen are also still unsigned. Usually, once the first QB drafted signs, the dominos begin to fall. As far as the amount, it is projected that Sam Darnold’s contract will have a total value of around $32,993,327. with a signing bonus of around $20,285,749. Jet fans need not worry. Sam Darnold will be signed before training camp starts.

Jets Open Practices
The Jets have scheduled 3 open practices this year, Sunday, July 29, Saturday, August 18, Sunday, August 19. Unfortunately according to the Jets web site all 3 sessions are sold out. If you know someone who has an extra ticket, and you’ve never been to one of their practices, get going! I can be the biggest Jets critic but they do a great job for their fans at these open sessions. And if you ever get a chance to bring your kids, the interactive games they have are great. It is too bad there are only 3 open practices this year. The Jets and the NFL need to do a better job with more dates and allow more fans to attend. Why not have these 3 open practice at Met Life Stadium? 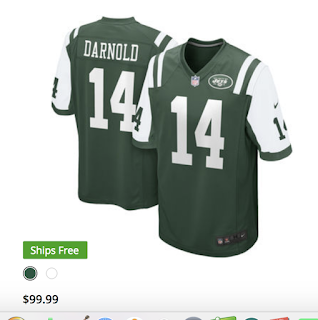 Green Tidbits
…..Lorenzo Mauldin recently spoke with urgency about his standing with the team, "I'm definitely trying to fight for my roster spot. I'm overwhelmed, actually, because now it's like: It's now or nothing.”…..Jets free agent RB Isaiah Crowell is only one of two backs (the other Frank Gore) to play in all 64 games the last 4 seasons…..Un-drafted free agent OLB Frankie Luvu from Washington State should make the 53-man roster. In his Senior year he recorded 6.5 sacks and 48 tackles, 12 of which were for a loss. He seems to be making his way into the Jets’ good graces, as he saw time with the first-team during minicamp….. TE Eric Tomlinson signed off Texans practice squad on Nov. 5, 2016 may be a sleeper. Pro Football Focus rated him third in pass blocking efficiency among tight ends…..The Jets Green and White scrimmage will be on Aug. 4 at HighPoint.com Stadium at Rutgers……

What The Jet Scribes Are Saying
Rich Cimini, ESPN
The New York Jets ended the 2016 season with an old, overpaid team that suffered from a serious talent deficiency. The powers-that-be expected the playoff-contending window to stay open that year, but it came crashing down with such force that it shattered the glass. They decided to start over, but instead of another half-baked rebuild -- the story of the Jets' history -- they really meant it. What we've seen over the last two offseasons has been nothing short of dramatic. If this were a book, it would be entitled, "How to Overhaul a Football Team in Only 16 Months." The Jets will report to training camp in a month with a team that barely resembles the not-so-sweet '16 group -- only seven holdovers among the starting 22. General manager Mike Maccagnan flipped the roster, and the best way to appreciate that is to heed the famous line from "All the President's Men." Follow the money. In 2016, seven of the 10 highest-paid players on the team (based on cap charge) were in the 30-and-over category. It's always dangerous when you invest in players on the downside of their careers, as the Jets painfully discovered…..
…..Chances are, the top of the roster will have a different look in 2019 because 10 of the Jets' 17 highest-paid players will be unrestricted free agents, including seven on offense. With a projected $90 million in cap room, the plan in Year 3 is to pour money into the offense, which should have the most important piece in place -- quarterback Sam Darnold. Realistically, the Jets need one more productive draft and another free-agent cycle before the roster is ripe for contention. That would constitute a three-year plan, which should be enough time to get it right.


Menus Mehta, NY Daily News
(Brandon) Shell has shown enough promise in his 15 career starts to give Gang Green hope that he can continue to improve at such a pivotal position. His size and athleticism have always been his strengths. It’ll be up to new offensive line coach Rick Dennison to cultivate Shell’s talent. The third-year tackle has plenty of room for improvement. Expect new offensive coordinator Jeremy Bates and Dennison to employ plenty of stretch runs, so it’ll be incumbent upon Shell to polish that area of his game. The Jets had a lot of success on outside-zone runs last season, ranking third in the league with 2.07 yards before contact on outside zone runs, according to Pro Football Focus. There will be a renewed focus on the running game in 2017 after former play-caller John Morton’s tendency to fall in love with airing it out. What’s Shell’s ceiling? The Jets believe he will continue to grow into a dependable piece to their puzzle.

Brian Costello, NY Post
(Kelvin) Beachum joined the Jets last year after a disappointing season with the Jaguars. There were questions about his surgically repaired knee, but he was fully healthy and missed just one snap the entire season. Beachum’s play was up and down. He was a strong pass blocker, allowing just four sacks all season, according to Pro Football Focus. He was not as strong in the run game. The Jets’ offensive line as a whole was a disappointment in 2017, and Beachum was part of that. The Jets fired offensive line coach Steve Marshall after the season because the group took a step back. PFF had Beachum ranked as its 35th best tackle. He was 71st in run blocking and 18th in pass blocking. He allowed 21 quarterback hurries. Beachum was called for four holding penalties.
Beachum did emerge as one of the locker room’s leaders, particularly on the national anthem issue. Beachum is involved with the Players Coalition and was one of the point men for the Jets in the talks with the league and NFL owners. Beachum is the second left tackle the Jets have acquired in hopes of replacing longtime standout D’Brickashaw Ferguson. Beachum played much better than Ryan Clady did in 2016, but still was not convincing that he is a long-term solution for the position. Beachum will be the starter again this year, and there is really no one on the roster who could even challenge for the job. Ben Ijalana is the only other player who has experience at left tackle.This is a big year for Beachum. The Jets could cut him after this season and save $8 million in cap space. If he is unimpressive, that would be an easy decision. 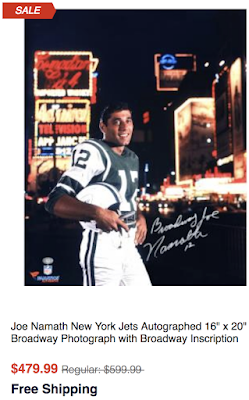 Click Joe Namath for the best in Jet collectibles


Around The NFL
…..The NFL suspended Tampa Bay Buccaneers quarterback Jameis Winston for the first three games of the season for violating the league's personal conduct policy, NFL Network Insider Ian Rapoport reported, per sources informed of the situation…..Mark Ingram was suspended for the first four games of the 2018 regular season after the National Football League determined the running back had violated their performance enhancing drugs policy…..Former NFL player Keith McCants was arrested by St. Petersburg, Fla., police early Monday and charged with felony possession of crack cocaine, the Tampa Bay Times reported……Randall Cobb could miss the start of Packers training camp with an ankle injury, according to a report from the Milwaukee Journal Sentinel…..Atlanta announced Monday it signed defensive back Ron Parker. The 30-year-old is set to enter his eighth season in the NFL……Sam Beal went into his Pro Day as one of the top prospects in the supplemental draft in years. That was confirmed by the presence of all 32 teams at Western Michigan on Thursday. He ran the 40-yard dash in 4.47…..Danielle Hunter was considered a raw prospect when he entered his name into the 2015 NFL draft after registering 4.5 sacks during the latter two seasons of his three-year career at LSU. On Wednesday, the Minnesota Vikings awarded Hunter a five-year contract extension worth $72 million, with $40 million in guarantees…..Former Buffalo Bills guard Richie Incognito said Wednesday that he is considering a return to the NFL…..NFL Network's David Carr is predicting the 49ers will start the season 0-4…..

Posted by Marty Schupak at 6:15 PM