Okay Jet fans, let’s start with a trivia question:
Who was the first rookie quarterback in NFL history to start his career with a record of
3-0 in his first three starts? The answer will be given later.

The bye week couldn’t come at a better time for the Jets. David Harris (quadriceps), safety Calvin Pryor (bruised knee) and defensive end Leonard Williams (sprained ankle) hopefully will all be ready to go against the Redskins. If Eric Decker is completely healed, this will also be a plus.
The Jets offensive linemen have allowed just two sacks, tied for the league’s fewest. But the Jets have also given up the fourth most quarterback hits in the league. The line has four of five starters over 30 so this may be eventually become an issue. Also, historically Fitzpatrick has played well early in the season only to go downhill in December. Let’s see how well he can keep this thing going.

1)    I’m concerned about the over use of Chris Ivory. I don’t see how he will be able to maintain this pace. By the way, I know exhibition games are meaningless but Zac Stacy doesn’t look like the same player now, compared to the pre-season. He is just not hitting the holes. RB Stevan Ridley is on the PUP list and I’m not sure of his status. In 2012 he rushed for over 1,200 yards for the Patriots but no one knows how much he has left in the tank. He fumbles, but he can help.
2)    Sheldon Richardson will be back which is a huge plus. I expected the league to add a couple of more games to his suspension but so far so good.  The “D” line will be able to rotate players and with their talent and this will give the opposition fits.
3)    Demario Davis is getting better with each game. Hopefully he keeps it up.
4)    As I mentioned before, I’m not at all happy with our punter. Our punt returns and punt coverage have also been abysmal.
5)    Wishing, hoping, praying that Fitz and Devin Smith will get on the same page.
If they do, it should be exciting. Smith is just oozing with talent.
6)    Coach Bowles has got to be more selective on his challenges.
7)    We have to cut down on our penalties. 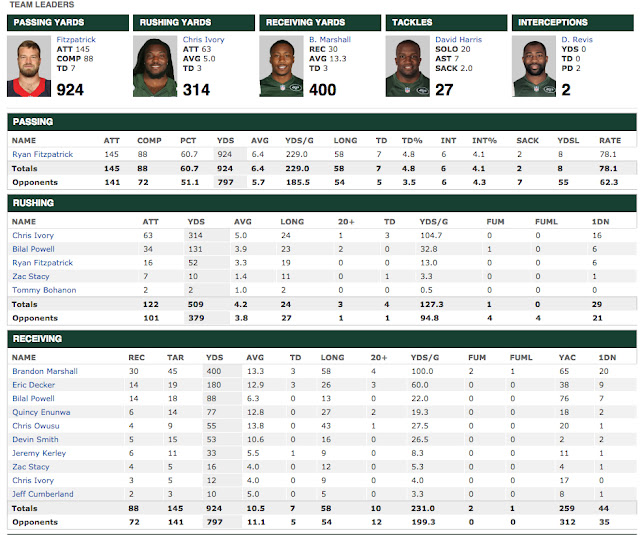 Posted by Marty Schupak at 2:21 PM