The Jets play the Washington Redskins tonight (7:30 pm CBS) in their second exhibition game. First off, a couple of readers pointed out and correctly that literally every exhibition game is a victory if you come out of it without any major injuries. All NFL fans know that the league is a league of attrition. Teams that go through the season without being one of the leaders with injured reserve players, have a good chance to compete. The Jets came out of the Jacksonville game in pretty good shape. The running back situation is becoming a little challenging but so far so good. Speaking of the running backs, the Jets signed Antone Smith, (see his stats below) a Florida State graduate who played the last five years with the Falcons. With injuries, anything can happen. The Saints lost their #1 pick this week, Sheldon Rankins who broke his leg in practice.

Tonight, look for Bryce Petty to get a fair amount of reps against the Redskins. If the Jets don't carry four quarterbacks, he is likely to be the casualty. I’m hoping the Jets give him enough time and support to get into some kind of rhythm. Playing with some of the back-ups, Petty was under fierce pressure especially toward the end of the game. He showed us he has talent. He has got to put together a couple of good showings in a row.
I'm not a Geno Smith fan but he should be given (and deserves it) the opportunity to have a few reps wtih the first team. The games he has started, the receivers have not been as talented as the ones on the Jets roster right now. Geno’s numbers lifetime are 27 TDs with 35 INT’s and a QB rating of  72.3. Real pedestrian numbers but I’d still give him reps with the first team. Again, I’ve been one of Geno’s biggest critics but let’s be fair. Some of the wide receivers he was throwing to in his 2+ years at quarterback were Stephen Hill, Clyde Gates, T.J. Graham and Greg Salas. Who knows, maybe the Jets  are able to eek out a 6th or 7th round pick for him. Make no mistake, bench quarterbacks who have starting experience have value in this league. When Dallas Cowboys back-up Kellen Moore went down with a broken leg, I figured they would have given the Jets a call. But the excellent play of draft pick Dak Prescott changed all that. Tonight I’d like to see Fitz in for only one series then have Petty and Geno split the rest of the time up to the 4th quarter then we get to see Hackenberg.
On the injury front, it seems like every summer there is one position that gets the injury bug. This year it looks like if things continue it can be the wide receiver position. One team, the Buffalo Bills are already somewhat depleted at the position. This bolds well for the Jets because of their surprising depth at that position. In the value game of the NFL, positions can go up and down like the stock market. I love these young receivers, J. Marshall and Peake. Let's hope their good play continues and the Jets have a problem they don't mind having. Too many good players at one position.

What the Jet scribes are saying:

"Leo was manhandling people up front the whole practice," said Buster Skrine, who wasn't the only person in the meeting room who noticed. Leo is Leonard Williams, who might be the most impressive player so far in the New York Jets' training camp. After a solid rookie season, he's ready to graduate to a new level. In the preseason opener, he wrecked a potential touchdown drive with a third-down sack deep in Jets territory, welcoming Jacksonville Jaguars quarterback Blake Bortles to New Jersey. The Jets should have one of the best defensive lines in the NFL. It might take some time, with Muhammad Wilkerson coming off a broken leg and Sheldon Richardson bracing for a one-game suspension to start the season, but this line will be scary good. The 6-foot-5, 302-pound Williams is growing up before their eyes, becoming more assertive and showing more vocal leadership on the field than his rookie year. He's still learning how to read blocking schemes and use his hands to defeat blockers, but he has improved in those areas.
_________________________________________________________________________
Brian,Costello, NY Post

One of the best parts of training camp is watching the guys who are under the radar find their way into the spotlight and make a push to be on the 53-man roster. Here is a look at five Jets who you may not know much about, but are making their case.

Jalin Marshall, WR
Marshall barely fits into this category anymore. An undrafted free agent out of Ohio State, Marshall has been the breakout star of camp. Coach Todd Bowles has done everything he can to avoid talking up the rookie, but his actions are telling. Marshall has gotten a decent amount of time with the starting offense and his teammates are raving about him. On Thursday night against the Jaguars, Marshall showed what he could do as a returner, going 84 yards just before halftime to set up a Geno Smith touchdown pass. It feels like Marshall already has made the team, but he needs to keep impressing to make that a certainty.

Charone Peake, WR
The seventh-round pick out of Clemson has emerged over the past 10 days in camp. He consistently is putting together strong practices and performed well against the Jaguars in the preseason opener. Peake caught four passes for 45 yards and made a nice touchdown catch in the front corner of the end zone. Peake was projected as a third- or fourth-round pick in the draft, but fell to the seventh round because of two knee surgeries and small hands. The Jets may have gotten a steal. How many receivers to carry on the 53-man roster will be a tough decision for the Jets, but Peake is going to be hard to cut.

Doug Middleton, S
Middleton sealed the win over the Jaguars with an interception, but it was his tackling that really caught attention. He made some big tackles to prevent large gains by Jacksonville. One of the knocks on him coming out of Appalachian State was he was not a sure tackler. In training camp, Middleton is one of those guys who keeps making plays to get your attention. He is a big hitter whose best chance to make the team is if he can win over special teams coach Brant Boyer.

Shelby Harris, DL
A seventh-round pick in 2014, Harris spent the past two seasons with the Raiders. It is hard for linemen to really show up much in practice because of the limited contact rules, but Harris had a strong game against the Jaguars. He was in the backfield a bunch and should have been credited for a sack of Chad Henne. Instead, the credit went to Darron Lee, who fell on Henne after Harris tripped him up. It will be difficult for Harris to make the team because of the depth on the defensive line, but he might be doing enough to catch on with another team.

A year after the Jets drafted Petty in the fourth round out of Baylor, the team invested a second-round pick on Hackenberg, meaning Petty is in the most precarious position as the Jets prepare to face the Washington Redskins on Friday night. Speaking after practice Wednesday, Petty admitted being a little taken aback when the Jets selected Hackenberg this spring. "It was tough," Petty said. "But at the same time, if anything it's motivation for me. And that goes for anybody. There's a new crop every year to take your spot, that's just how it is. You can't be sensitive about it. It was one of those deals where you're like, alright, here we go, it happened sooner than I thought but here we go………………

…………..Petty is trying to make the most of his opportunities in training camp, but they have been limited. For instance, in Wednesday's practice he only got to throw seven passes during team drills. The first was a beautiful long completion to rookie wide receiver Jalin Marshall. But the rest were mostly short passes that didn't stand out.
Carrying four quarterbacks on a roster is certainly not common in the NFL these days. Petty remains hopeful, but also sounds well aware that his future could lie elsewhere. 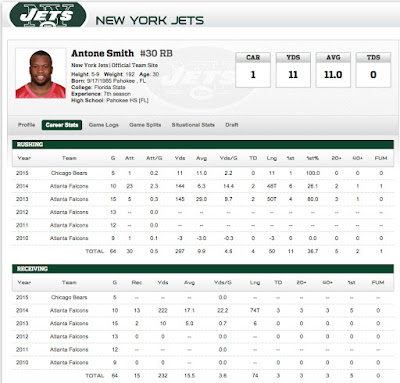 Posted by Marty Schupak at 8:17 PM